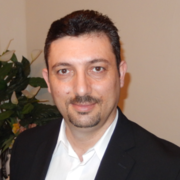 Ayman A. Isaac received his B.Sc. degree in Electrical Engineering/Electronics and Communications and M.Sc. in Electronics and Communications from University Of Mosul, Iraq in 1996 and 1999, respectively. He started his career as an RF engineer for a private electrical consulting company and in 2002 became a faculty member of the Department of Electrical Engineering\Electronics and Telecommunication at the University of Mosul. In 2013 he joined Molex USA as a project engineer. In 2014 he received an M.S. in Applied Sciences and in 2016 received a Ph.D. in Engineering Science and Systems ENSS\Telecommunication and Networking at the University of Arkansas at Little Rock. In 2021 he joined Isola-Group USA as a senior signal integrity engineer. In his career he worked on designing high speed cables, connectors, and boards including the work for 112G and the development for the 224G serial data links. His current focus is on the development of high-end laminates to support the increasing demands of higher data rates, accurate extraction of the loss and the electrical properties of the laminate materials beyond 20GHz, and look for models that more accurately represent the laminate material in simulation tools.

During his career he participated in many research papers, books, and patents. He is recipient of the UA Little Rock Research Competitions and Creative work Award in 2013, 2014, and 15 and a recipient of the Successful Doctoral Student Award in 2017. He was a Member and a Chair of the Industrial Advisory Council of the Electrical and Computer Systems Engineering program at UA Little Rock for 2017-2018.